There is a short cut here that becomes our first Product Law of Exponents:

Taking this idea a step farther….what happens if we have:

Similarly, when there is a product inside the parentheses, you raise each term to the outside
exponent…

If, instead of multiplying, we divided,

So, looking at the exponents so you see a short cut? This becomes another law of exponents.

Look what happens when we apply this law to this situation:

Now by the law of exponents ,

So we know that any real number raised to the zero power equals 1. (Corollary to Law 4)

Another helpful law of exponents is:

There is a situation where using the laws of exponents is dangerous. Let’s look at that now.

but what does this mean? Doing this the long way we see that

In general, this law of negative exponents is:

The danger is two-fold. When you look at

and get a4 (Why is this wrong?) OR when
you look at

and get a3 as an answer (Why is this wrong?)

Simplify and express with positive exponents: 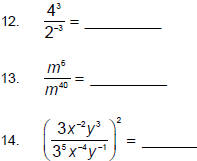 Now that we have the basic laws for exponents, apply them to the following problems.
Express your answers with positive exponents.

In this lesson we see exponents used in equations. Later in Math 9 you will learn how to do a
more difficult type of equation with exponents.

Scientific notation is used to make very large and very small numbers easier to read and to
calculate with them. The rule is that you move the decimal point as many times as necessary
to have just one non-zero digit to the left of the decimal point and account for the number of
times you moved the decimal by a power of 10. (It’s not as complicated as it sounds)

First, find the decimal point. In a whole number the decimal is assumed to be to the right of
the one’s place digit. So, in this case it would be 8,532,000

Second, move the decimal point until it is between the 6 and the 5. How many places did it
move?

Third, write the number as the new decimal times 10 to the power of the times you moved the
decimal. 8.532 x 10___ since we moved the decimal point 6 places.

To check: remember that

When you multiply or divide numbers in scientific notation, you treat the decimal part and the
powers of 10 separately. For instance,

Then multiply the powers of 10:

You must be careful, though, as this next example shows.

but this is NOT scientific notation! (Why?)

Write the following in scientific notation:

Write these in standard form:

Calculate and express your answer in scientific notation:

(try this without a calculator)