This is a closed book, closed note exam. It consists of 8 problems, plus
3 extra credit problems. Each problem is worth 12 points, and each extra
credit problem is worth 3 points. In addition, you will receive 4 points
for writing your name. You may not use a calculator on this exam. Good luck!

2. (a) Which of the numbers below are natural numbers? Which are
integers? Rational numbers? Real numbers? Fill in the chart
below by writing "yes" if the number belongs to the corresponding
set, and "no" if not. (Note: a number may belong to more than
one of these sets.)

(b) Write the number 1035 in base 10 (recall that the subscript 5
indicates that the number is currently written in base 5).

4. (a) Peter is just beginning to learn to count using our base 10 enumerative system.
He doesn't understand why 30 is the next number
after 29. How would you explain it to him?

(b) Which of the four fundamental operations of arithmetic satisfy
the commutative property?

(e) Recall the distributive property of multiplication: if a, b, and c are numbers, then a(b + c) = ab + ac. In your solutions to problems (c) and (d) above, you implicitly used this property. Explain how.

6. For each of the four problems below, select the model from the list that
ts. After brie y justifying your choice, solve the problem.

(a) Julia is preparing a meal. She knows how to cook 13 different
entrees and 17 different side dishes. If a meal is a combination
consisting of one entree and one side dish, how many different
possible meals can Julia cook?

(b) In Portland, Maine, it was -11 degrees Farenheight on December
21st. After 8 days, the temperature warmed up to -5 degrees
Farenheight. How much warmer was it in Portland on December
29th than it was on December 21st?

(c) My car has an average fuel efficiency of 43 miles per gallon. If I
can travel 417.1 miles on a tank of gas, how large (in gallons) is
my gas tank?

(d) One day, Elizabeth decides to walk home from the office. If the
total distance from her office to her home is

miles, and she has
walked 2/3 of the way, how far away from the office is she?

(b) On Jerry's birthday, his mom cuts his birthday cake into 20 pieces
and gives him 3. Now Sammy is crying because Jerry got more
pieces of birthday cake than he did. How would you explain to
Sammy that he actually got more cake than Jerry did?

8. Let a; b be two numbers such that 0 < b < a < 1. In the table below,
fill in the second column with either <, = or > so that the first three
columns give a true number sentence. In the fourth column, give a
justification for your choice of <, =, or >. (Note: examples do not
constitute sufficient justification and will not receive full credit.) 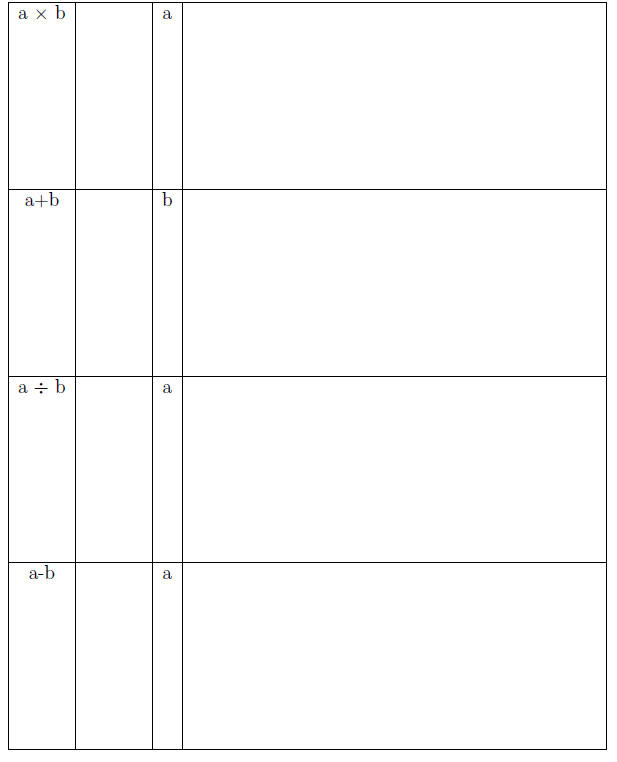 Extra Credit: What is your instructor's favorite number?